Plate–chip for a mobile phone 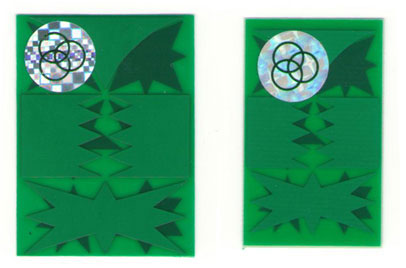 Plate–chip for a mobile phone

The protective “plate – chip” (dimensions: 21 х 35 mm; 24х 24 mm; 22 х 33 mm) from electromagnetic emission of a mobile phone or communicating device, patents of Russia and Kazakhstan. The device is placed in a case of the mobile device above, or under a battery, the device protects an ear and encephalon from high-frequency signal, destroying cells and energetics of a human being. The protective radius makes 75 cm; efficiency of the device is 85%.
When exposed into a zone of adverse radiation in the device it is occurred a powerful induced counter electromotive force, aimed at attenuation of the adverse radiation in the most dangerous frequency range for a human being (42-68 GHz). At that, in the area of the device operation (1 m), the harmful cell phone radiation is terminated for all intents and purposes.
According to data provided by the World Health Organization (WHO), the signal from the mobile phone is especially dangerous for pregnant women and children up to 16 years. In 2002 at the meeting of Ministers of Health of the European Community (EU), it was recommended to prohibit to minor citizens to use cell phones. French scientists established that the radiation processing of chicken eggs by the mobile phone in the incubator led to death of 50% of chickens. The worst thing is that the WHO promises appearance of after-effects in 20-30 years. By figurative comparison of several scientists, mobile cell phones are just “toast” the brain.

Valentin Evgenievich Shubin, doctor of engineering science, is the owner of over 180 patents for his inventions in the field of electromagnetic safety and defense technologies.